Chelsea, a three-and-half year old mixed breed dog, came to us February 2019 from another area shelter where she was sadly slated for euthanasia for behavioral issues. Our animal care team felt that they could work with her and hopefully save her life, so we accepted her transfer to Humane Society Naples. We made a commitment to understand her issues and work with her to overcome them so she could eventually be adopted into a loving new forever home.

Uncovering Chelsea’s story took some time. When she first arrived at our shelter, she was a perfect angel on her best behavior. But as she settled into her surroundings, she became more assertive and difficult to control. Her early Report Card gave her “failing” grades, so we knew we had our work cut out for us. We knew that there was a lovable, fun family pet inside of Chelsea, and we were determined to help her bring it out.

Chelsea proved to be a highly intelligent dog, and a bundle of energy. Not surprisingly, her biggest challenge was boredom – she needed boundaries and rules. Our behavioral team committed the extra time necessary for focused play and training to reinforce her positive energy. And since she is such a smart girl, she quickly learned that following the rules led to positive reinforcement – otherwise known as treats!

After several months and hundreds of hours of intense training, Chelsea has become one of our top canine training students. It’s hard to believe that her current report card is even for the same dog! She is available for adoption at our main shelter and eagerly waiting for the right person or family to give her a well-deserved new life-long home.

As our April DeVoe Subaru Dog of the Month, Chelsea’s adoption fee is generously sponsored and her adoption includes a Subaru goody bag. 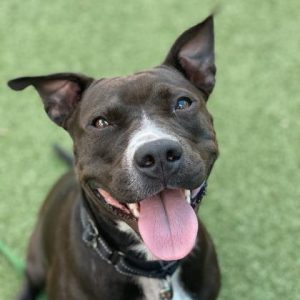 Newer Ling Ling’s Search for a Home
Back to list
Older Artichoke: An Alumni Tail
close